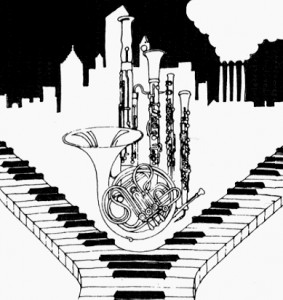 Varying in instrumentation and size from 3-10 musicians, the Renaissance City Winds is named after Pittsburgh’s nickname and dedicates itself to performing and recording the finest music for wind instruments. It has become one of Pennsylvania’s foremost chamber ensembles since its founding in 1975.  RCW has released CDs on the Elan and Centaur labels; been broadcast on television and public radio; and toured throughout the East with appearances at Carnegie Hall (NY), the Kennedy Center (DC), Blossom Music Festival, and the Pennsylvania Governor’s Residence. Originally a Pittsburgh woodwind quintet, the “Renaissance City Woodwind Quintet,” the group increased its collaborations with guest artists and the frequent performance of octets and decets – most concerts used more than five players – and the ensemble officially expanded and shortened its name in 1988.

While it performs music from the sixteenth century to the present, the group has received special recognition for its devotion to American music. It has commissioned many works from contemporary composers, and performed older treasures it has researched from the Library of Congress, the Harmonists, and the Moravian collection.  In 2001 it won one of MEET THE COMPOSER’s community residency grants, one of only four awarded nation-wide that year.

The ensemble has captured nationally-competitive awards and grants from Chamber Music America, the National Endowment for the Arts, MEET THE COMPOSER (now merged into New Music America), the Alice M. Ditson Fund, and the Aaron Copland Fund for Music.

A fall-to-spring series, usually of three or four programs, that provides the opportunity to experience the warmth and joy of chamber music in the intimate setting of elegant private homes or other unique venues.  Tickets to these “parlor concert” include meet-the-artist receptions. Some programs are repeated in a small hall of 150-250 seats, often at our residency host, Carlow University.

The Winds currently tour through ten states in the Mid-Atlantic and Upper Midwest regions.  If you are a presenter and would like to hire the Winds for your series, please check the “Touring” menu.

The Winds have ongoing CD projects to record chamber music, most of which are world premiere recordings.

The Winds have developed extensive programs for residencies in middle schools, high schools, and colleges. These are available both in the Pittsburgh region and on tour.  In addition to traditional offerings of chamber music coaching and master classes, there are arts-integration lecture-demonstrations on various topics. And RCW’s composer program for middle-school students provides a truly unique opportunity for creative development.

The Winds regularly work with NPR stations to get chamber music on the air, especially WQED-FM in Pittsburgh.  Broadcasts include both CDs and recordings of live concerts, both at home and on tour.

Since 1989,the Winds have produced occassional concerts in architectural and historic landmarks of Allegheny County, with the musical program selected to complement the building or the surrounding community.

The Winds are passionate about performing American music, especially that of Pennsylvania composers whose music needs to be brought before the public.  In addition to commissions, the Winds regularly premiere and give repeat performances of other contemporary pieces.