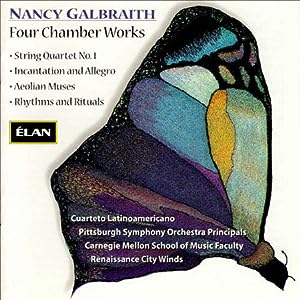 This brilliant post-minimalist work for quintet and piano was commissioned by the Renaissance City Winds for the ensemble’s 20th anniversary in 1995.  It was designed to open the Winds’ Women of Note(s) touring program.  In 2000,  the Winds and the composer were honored to have the work, through this recording of it, selected by Chamber Music Magazine as “ONE OF THE 200 MOST REPRESENTATIVE CHAMBER WORKS OF THE TWENTIETH CENTURY!”

Also on the CD: three additional chamber works by Galbraith, performed by Carnegie Mellon University faculty and other Pittsburgh musicians.

from arkivmusic.com or directly from the Winds