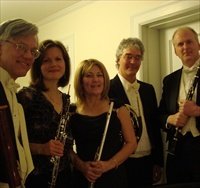 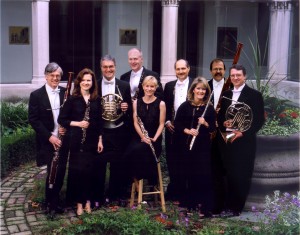 BARBARA O’BRIEN graduated from Duquesne University with a Bachelor of Music Performance degree, and then became Principal Flute of the Fort Wayne Philharmonic for five years.  She is presently Principal Flute with the Akron (OH) Symphony, the Wheeling Symphony, and the Pittsburgh Opera Orchestras, and also holds the position of Second Flute and Piccolo with the Pittsburgh Ballet Orchestra.  She has performed with the Pittsburgh Symphony and the Spoleto Festival Orchestra.  Her solo and chamber music performances include concerts in the New Hampshire Music Festival, Symphony School of America, the Spoleto dei due Mondi in Spoleto, Italy, and the Buzzards Bay Musicfest.  She has been recorded on CDs with the Wheeling Symphony, the Spoleto Festival, and the Buzzards Bay Musicfest.

TOM GODFREY performs with the Pittsburgh Opera and Pittsburgh Ballet Orchestras and is principal flutist for the Westmoreland and Johnstown Symphonies.   As a free-lance flutist he works with Pittsburgh Civic Light Opera, Wheeling Symphony, Pittsburgh Symphony and Gateway to the Arts Inc.  Mr. Godfrey has participated in music festivals in Europe and the United States. He  received his musical training on scholarship at Peabody Conservatory, New England Conservatory and Duquesne University.  Currently on the faculty at Carnegie Mellon University, he has also been a visiting assistant professor at West Virginia University. As a child, Tom’s first musical instrument was the guitar which he continues to play and maintain an active performing and teaching schedule. Tom and his wife Kathy currently share their lives with a very vocal greyhound, an ‘enthusiastic’ black lab and 2 personable quarter horses.

RENATE SAKINS has been the Renaissance City Winds’ oboist since 1995. An active freelance artist, she is also principal oboist with the Westmoreland Symphony and Academy Chamber Orchestra, and 2nd oboist with the Akron Symphony. She has performed with the Pittsburgh Symphony, Columbus Symphony and many other regional ensembles. Ms. Sakins has appeared as soloist with the Westmoreland Symphony, Pittsburgh Civic Orchestra, Pittsburgh Concert Chorale, and has been featured on WQED’s “Performance in Pittsburgh”.  She has performed at the Blossom and Cape May music festivals, and has toured in Canada, Japan, and throughout Europe. Ms. Sakins is Instructor of Oboe at Slippery Rock University and maintains a private teaching studio. She holds a B.M. degree from Temple University; her principal teachers were Louis Rosenblatt and Cynthia DeAlmeida.

JACK HOWELL, formerly principal clarinetist of the New Mexico Symphony Orchestra, performed for two years as second clarinetist with the Pittsburgh Symphony Orchestra before joining the New Zealand Symphony Orchestra as Associate Principal Clarinet.  He returned to Pittsburgh in 1999, now serves as Principal Clarinet of the Wheeling (WV) Symphony and Second Clarinet of the Pittsburgh Opera and Ballet Orchestras, and performs frequently with the Pittsburgh Symphony and other ensembles in the region.  A graduate of the University of Northern Colorado, he has performed extensively as soloist and chamber musician in the West, including concerts for the Santa Fe Chamber Music Festival aired on National Public Radio’s Performance Today.  He is an avid fly fisherman and builder of bamboo fly rods, and his book, The Lovely Reed:  An Enthusiast’s Guide to Building Bamboo Fly Rods, has been published by Pruett Books of Boulder, CO. 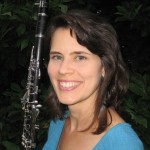 ALIX REINHARDT is currently the second clarinetist of the Wheeling Symphony and Canton Symphony.  She has performed with many other orchestras and organizations, including Opera Cleveland, Pittsburgh Opera, Pittsburgh Ballet, Akron Symphony, Youngstown Symphony, Erie Philharmonic, Charleston Symphony (SC), Richmond Symphony, Roanoke Symphony and South Bend Symphony.  Other engagements include a chamber music and solo recital in Pecs, Hungary, and most recently, a school concert tour in the Fukui Prefecture, Japan. Alix spends a great deal of time teaching as well as performing.  She has held teaching positions at Seton Hill University and The University of Akron.  She maintains a private teaching studio in her home of Cleveland.  Her primary teachers included James Campbell and Robert Riseling, and she earned her Bachelor of Music degree from Indiana University at Bloomington and her Master of Music degree from the University of Western Ontario. In her spare time, Alix can be found making pottery.

DAVID LINTZ returned from Europe in 1999,where he had served as principal horn with the Symphony Orchestra of  St. Gallen, Switzerland for twelve years, and with the Landestheater Orchestra Detmold, in Germany, for 2 years prior to that. David joined the Renaissance City Winds in 2000, and is principal horn with the Pittsburgh Ballet Orchestra and The Orchestra of the Alleghenies. He is also currently a member of the Pittsburgh Opera Orchestra, The Civic Light Opera Orchestra, a Sub with the Pittsburgh Symphony, and often performs with the River City Brass Band and the Wheeling, Westmoreland, and Youngstown Symphonies. He can be heard performing with many Traveling Broadway shows that come through Pittsburgh, such as the Lion King, Wicked, or Mary Poppins. In addition to being a faculty member at Seton Hill University, Washington and Jefferson University, and for the Carnegie Mellon summer pre-college program, he has performed at various music festivals such as the Sunflower Festival in Topeka, the Colorado Music Festival in Boulder, Colorado, and the Scotia Festival in Canada. Studies include a Bachelor of Music from New England Conservatory and a Soloist Diploma from the Lucerne Conservatory in Switzerland. Other activities learned in Switzerland include snowboarding and speaking German. Through the International Institute for Arts and Languages, Mr. Lintz offers a German instruction class titled “German through Music.”

R. JAMES WHIPPLE, bassoonist and composer, was a founding member of the Winds in 1975, and has served as Artistic Director since 1978.  He has recorded with CRI, New World Records, Centaur, Elan, Sony, and Serenus, and was Principal Bassoon with the Pittsburgh Ballet Orchestra for fourteen seasons. He has also played Baroque bassoon with three early-music ensembles. Mr. Whipple is an active composer and arranger, with many works performed, published, and broadcast in the United States, Europe, Mexico, and Canada. His catalog includes pieces for chorus, piano and organ, as well as many different chamber ensembles. Many of his compositions and most of his arrangements have been written specifically for the Renaissance City Winds. Together with Efraín Amaya, he was awarded Meet The Composer’s Pittsburgh New Residency grant from 2001-2005. His Concertino for An Autumn Mood – for solo bassoon, strings, and harp – was recorded by the Czech Radio Orchestra under the direction of Gerard Schwarz for the MMC label. Currently Coordinator of Chamber Music and Artist Lecturer in Music Theory at Carnegie Mellon University – specializing in counterpoint – and Lecturer in Humanities at Carlow University, Mr. Whipple has also taught at Slippery Rock University, West Virginia University, and the Chamber Music Conference of the East at Bennington College. Besides music, his passions include hiking, American history, and model railroading in S scale; he has been asked to give a number of clinics for national and regional conventions of the National Model Railroad Association and the National Association of S Gaugers, of which he is currently Executive Vice President.

DON HOLLIS, bassoonist, graduated from Duquesne University with Bachelor of Music Education and Master of Music Performance degrees. He was the first “expansion” member when the Winds began to enlarge the ensemble in 1985. Currently 2nd bassoonist of the Pittsburgh Opera and Ballet Orchestras, he has also performed with the Pittsburgh Symphony, Wheeling Symphony, Virginia Symphony, Westmoreland Symphony, Canton Symphony, Johnstown Symphony, and various chamber ensembles.  Mr. Hollis has repaired musical instruments since 1980 and is presently co-owner of Hollis and Germann Music, a Woodwind and Brass specialty shop with an emphasis on repairs and accessories. Any free time he has gets filled with biking, bowling, golfing, and boating (in Lake Erie, on his boat “Deck the Hollis”).